Abidjan was quite an experience for me. So much of it reminds on the Port au Prince of days yore and present day too. The people of Abidjan are youthful, stylish, energized, and oh so beautiful with a certain joie de vivre that is quite refreshing, hopeful and resilient.

I have since learned that almost 40% of the population of Cote d’Ivoire / Ivory Coast is under 30 years of age. Abidjan is where to statistic becomes evident. As is any other city, its young folks make the city. And young they are.

Abidjan, the city, is quite modern and cosmopolitan with its highway system, a vibrant Business District and High Rises. There is no doubt that Abidjan is a major commerce hub in West Africa. I read somewhere that Abidjan is also known in certain circles as the Manhattan of the tropic.

The city is also diverse with nationals from neighboring countries such as Mali, Nigeria, Ghana, Guinea, Togo and Benin. Others come from as far north as Senegal as far South as the Congos. There seems to be a substantial population of Arab mainly Lebanese that controlled the commerce community in Abidjan. Most supermarkets, hardware stores etc are owned and operated by the Lebanese.

WAYS OF THE SEXES…
I found that people of the region to be quite jovial, pleasant and communal. Rarely would you see someone alone. They tend to congregate with members of their own sex. The women, beautiful, whether they are in westernized clothes or wearing the colorful African garment wrapped on their bodies. They are equally comfortable in both. In the Market, the women will pile up on each other, grooming each other or just gossiping and laughing and constantly greeting passer-bys and looking out for one another.

The men would laugh, greeting each other with a handshake that ends in a finger snap as they quickly and forcefully pull their hands apart. They would have loud and spirited conversation about football (soccer) or just making joke about each other. They break bread communally and drink just the same. And yes men there too they grab and pull on their crouch constantly. They would line up and piss wherever they may be, on the side of the road, on a bush, next to a tree, just releasing themselves as if they are in the sanctuary of their own bathroom. A scenario I have often seen up in Harlem with the Dominican men on the Broadway Mall, an African trait that they can seem to shake no matter how hard they try.

One thing that at first frazzled me, then became evident that was the norm, was the fact that police men and national guards have not qualm stopping cars at check points and expecting to get paid on the low. Since I carry a US passport, I became a liability to my friends. You can see that once I produce my passport that the ante has upped some. Joel my host would order me not to speak and if spoken to you pretend as if I do not understand French and let them do the talking. At one point, one caught on and actually noticed my name and addressed by name Philippe and said “ l’American Beinvenue! Tu vas faire la fete … et Moi ou est Ma fete…” I could not help but laugh and he grinned with his set of pearly whites. The taxi driver took care of him and off we went to a night out at the Marquis.

West Africa… Why There?

A friend of mine wanted to hear more of my impressions of my first visit to Africa. He also wanted to know why Cote d’Ivoire and or Ghana. He is curious to know, if any, my connections to these places and my decisions to go to those countries rather Senegal for instance.

Simply put, Ivory Coast and Ghana are in West Africa and being an African of the New World, I feel a natural connection to the continent and a deeper familiarity with the region visited. West Africa.

THE DEAL IS…
I wanted to be on the continent for the Millennium. That was 10 years ago when I started to seriously contemplating the idea of visiting Africa. At one point, I did not really care where I landed. I just wanted to set foot on the continent. I explored traveling by ferry from Southern Spain to Morocco among other travel schemes.

Then, Senegal seems to be not too far out of reach if I can only find a cheap flight from either France or Spain. The urge to set foot in Africa took a sharp blow when racist Spaniards started to react violently against North African Migrant workers in Southern Spain. Since, I have not been in Spain for at least 7 years.

Then along came Joel, a Franco-Ivorien that I have met through a mutual acquaintance about four years ago. We fast became friends and since day one he invited me to go to Abidjan. Joel’s urging only rekindled in me the drive to travel to Africa a reality. His encouragement and constants urging became my the goal to accomplish in 2007.

Visiting Ghana came late into the picture. Not until when I was frantically looking for an affordable airfare that Ghana became part of my travel plan. Since the only direct flight from the New York to West Africa flies to Ghana, I instantly started to play with multiple destinations and dates that would include a couple of days in Ghana.

Luckily, I founf an airfare that would cost me a couple hundred dollars my airfare just by staying over in Accra for a couple days with connecting flight between Ghana & Ivory Coast. I was too happy to grab that fare and run with it. Then I remember meeting a couple of cool brothers over the summer and we were talking about traveling to Africa, unbeknown to me that one of then have been to Accra numerous time and insisted that I make it to Ghana and that he knows just the right person to put in touch there. Weeks later, I met Brian whom I have met earlier during the summer month and he was with this man. Guess who, Alwyn, the very brother he told me about. We talked for a short while and he extended his invitation for me to come to Accra and that he will be there just about the same time I was planning to be in West Africa. With so much things falling into place, I was only convinced that it was my time to go back Home. Home to Africa.

THE SPIRITUAL CONNECTION…
Being Haitian, I always feel that Africa is home. Never do I doubt that. I just know that I would make it there someday, somehow. I just know and believe I would one day.

In Haiti, there is a large majority of us who believe in this Vodou tenet that once we pass on our spirits travel back to its resting place. LAN GINEN, Haitian Kreyol for what is today Guinea a country in West Africa of course but this belief has much indept significance than the actual land/country to which . This idea of Ginen as our souls’ paradise / heaven, isn’t it profound how this notion of Lan Ginen does not have a hell like opposite as in Christianity’s heaven and hell notion. Go Figure!

LAN GINEN…
Roughly translated “In Guinea or There in Guinea” for most Haitians is our Spiritual Home. That is where we believe that our spirits travel back to reunite with our ancestors in Africa. Although it has been said that Haitians has strong cultural and worship habits with the people of Benin. Where the practice of Vodou in both places could be uncannily similar.

Needless to say that I always believe, that one day, I will make it home to Africa, literally, dead or alive. I am just happy that recently I was able to make it there alive. 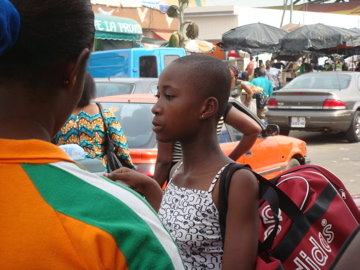 Abidjan Next Top Model at the Market in Treichville. 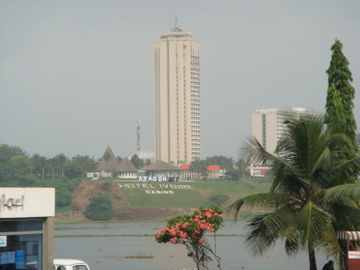 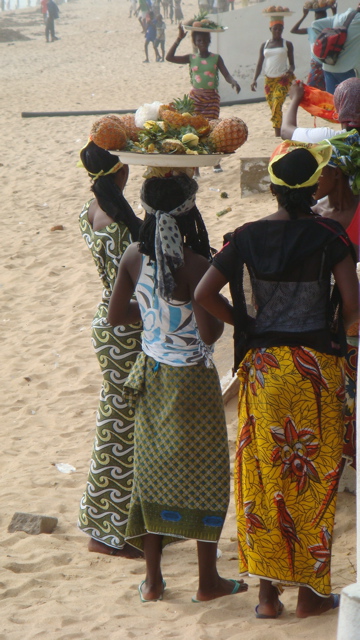 Fruit Vendors at the Beach in Bassam. Abidjan, Cote d’Ivoire 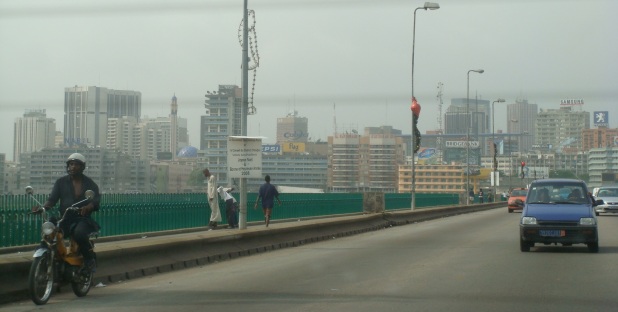 The following posts should have been posted long ago while in West Africa for the holidays. But due to limited access to the net and that kick ass French formatted keyboard in the local Internet Cafe, I chose to bypass that aspect of my vacation and decided to enjoy the people, sights and sounds of Abidjan.

But first, my gripe with Delta Airlines. Talk about quarantine a group of people traveling to Africa. I thought American Airlines was bad in hauling folks to Haiti like cattle. Delta Airlines has proven to have that practice down to a science and execute it with such rigor. More to come on that subject later.

I flew out of the USA on Christmas Day to Abidjan with a 5 hours lay over in Accra. Although, I have established a contact in Accra, I did not want to impose having not fully knowing each other well enough, I trooped out my lay over at Kotoka International. There I chowed down some Brit like Breakfast, napped a bit on a arrival hall’s bench and sent a couple of emails to the states letting some folks know that I have landed in the Mother Land.

Once landed I did not know what type of emotion would well up upon finding myself on the soil of Africa, West Africa as that where, we, from the New World, are believed to have our lineage. I did not think much about it or anticipate any reaction planed or unplanned. I have not ritual plan a la kiss the soil or say a prayer or utter some eloquent sound bite. Nothing. My agenda was simply to make my way to Africa in 2007.

Instead, I find myself noticing immediately the similarities in the typography of land and people of Accra to that that I have known growing up in Haiti. First thing that gets my attention and actually made feel a bit comforted was the outburst of laughter and hand clapping as the rear landing gears touched ground… similar outburst are common on any given American Airlines’ flight landing to Mais Gate.

One man shout ” I’m Home. I’m Home.” Another something along the line of ” I’m away from the stress and already I am at last relax…” The whole section of the cabin burst out laughing, in agreement, as if he had expressed what most have felt at that moment upon landing in Africa.

Until Next Time… peace to us all!